Oxygen transmission rate (OTR) films of 1,300 and 10,000 cc/m2/day/atm, perforated (P), microperforated (MP), and vacuum (V) films were investigated for suitability in maintaining the quality and prolonging shelf life of asparagus during cold storage. An additional investigation using 60% (v/v) carbon dioxide treatment (V + 60% CO2) was also performed. All samples lost fresh weight over time, P and V + 60% CO2 had the highest and lowest fresh weight loss rate by the last day. Only 1,300 cc and 10,000 cc OTR films kept the asparagus at a marketable value, the least off-odor was detected in P, and the worst was in V + 60% CO2 in final day. The V + 60% CO2 resulted in lower firmness in asparagus tips, and the V resulted in the lowest firmness in stems. Although, little color changes happened in all treatments, the V + 60% CO2 treatment had greater soluble solids content and hue angle. The highest ethylene concentration was detected in the V film. The CO2 and O2 levels of the 1,300 cc and 10,000 cc OTR treatments were more suitable for asparagus storage. In general, based on the visual quality, 1,300 cc and 10,000 cc OTR films were more effective for asparagus cold storage. To some extent, high CO2 treatment exhibited a positive effect on maintaining internal quality, fresh weight and color of asparagus.

Asparagus (Asparagus officinalis L.) has been used as a vegetable and in medicine for a long time. There has been an increase in asparagus production and consumption because of its highly nutritional and economical values. As of 2016, Korean cultivation acreage for asparagus had increased to 55.4 ha (Rural Development Administration, 2016).

The green asparagus spear is an immature vegetative tissue that maintains a high respiration rate and physiological activity after harvesting, which can lead to perishability. Although asparagus is a non-climacteric vegetable (Zhang et al., 2012), the changes in contents of CO2 and O2 could affect the shelf life and nutritional value during cold storage. Low O2 content inside packaging, along with the high respiration rate of asparagus, can lead to an off-odor (Gariepy et al., 1991). The CO2 content affects not only the respiration-related metabolism but also secondary metabolism (Watkins et al., 1999). Sanchez-Ballesta et al. (2007) confirmed that a short-term high CO2 treatment at low temperature could maintain the quality and prolong the shelf life of some table grape cultivars during storage. Bacteria and mold growth on fruit and vegetables is inhibited by CO2 (Mattos et al., 2012). Additionally, CO2 is beneficial for vegetable preservation by controlling postharvest decay (Holcroft and Kader, 1999), firmness (Chen et al., 2009), and color change (Siomos et al., 2010). An optimum level of CO2 is helpful for keeping produce fresh by reducing physiological activities such as respiration and ethylene production (Bhowmik and Matsui, 2004).

To learn how to prolong the shelf life and maintain the quality of asparagus during postharvest storage, many studies have been conducted to identify the most effective storage methods, such as controlled atmosphere (CA) (Lee, 1981), modified atmosphere (MA) (Gariepy et al., 1991) and hot water pretreatment (Yoon et al., 2018). Of these, MA storage slows down the respiration rate and other metabolic processes, inhibits pathogen development (Kahramanoğlu, 2017), has a low processing cost and is easy to apply (Yoon et al., 2017). Often, CO2 is used as a flushing gas in MA packaging (Mattos et al., 2012). The optimal concentration of CO2 is 5－12% and the suitable concentration of oxygen is 5% or higher in most cases (Kader, 2002).

Asparagus spears (Asparagus officinalis L. cv. Welcome) were cultivated in the open field in Yanggu-gun, Gangwon-do, Korea. The asparagus spears with a 1.4 ± 0.1 cm diameter and 24 ± 1.0 cm lengths were selected for this study in May 2019.

All experimental groups were stored at 2 ± 1°C with a relative humidity of 85 ± 5%. Fresh weight, the concentrations of CO2, O2, and C2H4 in packages, and visual quality were measured every 5 days. Soluble solids, hue angle, firmness, and off-odor were also checked on the initial day and final day of storage.

Fresh weight loss rates were measured according to the following formula:

Visual quality, the most important factor to consumers purchasing asparagus was reduced during storage using all treatments (Fig. 1B). Different treatments showed significant difference (Fig. 2A) Perforated and microperforated film packaging had the lowest level of visual quality. The 1,300 cc and 10,000 cc OTR treatments maintained marketable visual quality (scores ≥ 3) and had the least off-odor on the final storage day. The off-odor was worst in vacuum film and V + 60% CO2 treatments (Table 1). High CO2 concentrations led to the accumulation of fermentation products and affected the acceptability of strawberries (Chen et al., 2009). Tian et al. (2002) found that ethanol production increased when high CO2 treatments were applied to longan fruits causing off-odor and decay.

Changes in internal qualities and color

In addition to the visual quality and off-odor, firmness is another crucial parameter that can negatively affect sale value and shelf life because consumers tend to buy soft asparagus. Our results showed that the firmness of tips and stems increased from the initial storage day to the final storage day (Table 1). Firmness was higher in perforated film and microperforated film treatments and lowest in the V + 60% CO2 treatment. High CO2 could suppress firming of asparagus spears. This is in agreement with studies showing high CO2 and low O2 concentrations could inhibit the energy supply used in cell wall synthesis and spear toughening (Helen et al., 1992). Asparagus spears retain high physiological activity (Heyes et al., 1998) after being harvested; thus, lignification and cellulose content can increase. High CO2 inhibits excessive postharvest accumulation of cellulose and hemicellulose compounds which can cause asparagus spear toughness (Huyskens-Keil and Herppich, 2013). Furthermore, elevated CO2 can inhibit PAL activity (Chen et al., 2009; Holcroft and Kader, 1999), a key enzyme used in lignin synthesis (Bhowmik and Matsui, 2004). In a previous study, the total soluble solids content declined in all treatments during postharvest storage, with the 10,000 cc OTR film treatment yielding the highest content (Yoon and Kang, 2017). In this study, soluble solids were significantly higher in vacuum film and V + 60% CO2 packaging compared to other treatments (Table 1). High CO2 concentrations inhibit respiration, a process which consumes soluble solids. High CO2 concentration substantially lowered sugar consumption (Heyes et al., 1998). A short-term 20% CO2 treatment promoted the accumulation of some nonstructural carbohydrates in grapes (Blanch et al., 2011).

Color change is a major factor in determining the quality of asparagus spears, and stem yellowing is a visual indicator of deterioration during long-term storage (Yoon et al., 2016). The degree of yellowing in asparagus spears is determined by measuring the hue angles (Chang and Kim, 2015). The hue angle values of green asparagus were similar between the initial and final measurements, except in the perforated and microperforated packaging. The perforated film treatment had the lowest hue angle on the final storage day (Table 1). In a previous study, we found that the 10,000 cc OTR treatment was the best treatment for maintaining the color of green asparagus during cold storage. In this study there was no significant difference in the hue angle among the 1,300 cc, 10,000 cc, vacuum film and V + 60% CO2 treatments, although the highest hue angle value occurred in the vacuum film treatment. Kader (2002) reported that the color change or yellowing of some horticultural products was related to aging and ethylene. Asparagus processed with 10 µL/L-1 ethylene led to the reduction of chlorophyll (Lee, 2015). Elevated CO2 can retard the damage caused by ethylene (Yoon et al., 2018), therefore the yellowing of asparagus declined under high CO2 storage. Our results were similar to studies conducted on strawberries during which CO2 treatments inhibited the decrease of hue angles (Li et al., 2018).

The concentration of ethylene was elevated compared with the initial day (Fig. 3). Some researchers have shown that wounds can induce the formation of ethylene by activating ACC synthase and ACC oxidase (Kato et al., 2000), both key enzymes in ethylene synthesis and decomposition. Ethylene synthesis is a response of plant tissue to damage (Kato et al., 2000). It is worth noting that the highest C2H4 concentration was detected in the vacuum film treatment because of the low gas transmission rate. Because CO2 is a competitive inhibitor of ethylene (Lee et al., 1996), increasing the CO2 concentration causes a decrease in ethylene. Atmospheric composition in the packaging is important for maintaining the quality and shelf life of green asparagus during long-term storage.

The oxygen contents in all packages, except perforated film and microperforated film, showed a sharp decline after the first storage day (Fig. 4A) but remained stable during the entire cold storage period. The lowest oxygen content, less than 1.5%, was found in the V + 60% CO2 treatment. Some studies have demonstrated that oxygen content less than 3% can lead to deterioration in asparagus quality due to anaerobic respiration (Gariepy et al., 1991). The 1,300 cc and 10,000 cc OTR film treatments maintained a suitable oxygen content of greater than 5% (Kader, 2002). 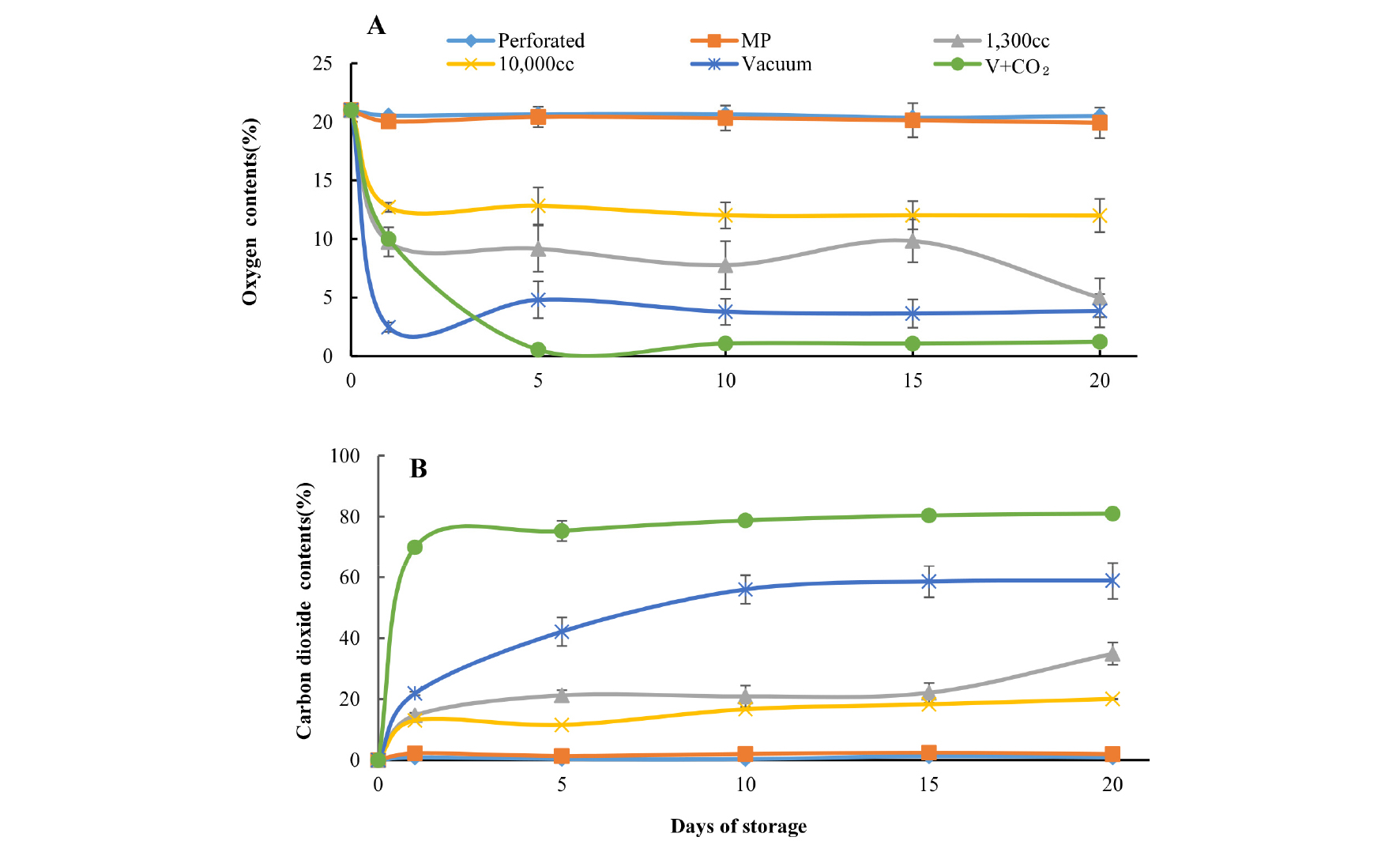 Considering the acceptability of green asparagus in the consumers, visual quality, off-odor, texture, color are critical factors. Our purpose was to shed light on the effect of CO2 on the quality and shelf life of green asparagus during long period of cold storage. The results showed that MA packaging films were better for asparagus postharvest storage with the good sensory quality and long shelf life. And high CO2 treatment could retard the decline of soluble solids, inhibit respiration and the action of ethylene. To some extent, it can be used as the protector in asparagus postharvest storage. But the suitable concentration of CO2 and duration to green asparagus long-term storage should be evaluated.

This work was supported by the IPET through Export Promotion Technology Development Program, funding from the Ministry of Agriculture, Food and Rural Affairs (117035-03).