Campylobacter is a major food-borne pathogenic bacterium commonly found in poultry, including chickens. Therefore, it is necessary to study its prevalence among commercially available chickens. In this study, we investigated the prevalence of Campylobacter among commercially available raw whole chickens from three different sources, and chicken cuts from four different sources. Campylobacter was isolated from 23/30 (77%) whole chickens and 22/30 (73%) chicken cuts, with a 75% prevalence in total. Among the positive samples of whole chickens, C. jejuni and C. coli were isolated from 12 and 11 samples, respectively. In chicken cuts, the prevalence of C. coli was much lower at 4/30 samples (13%) than that of C. jejuni, which was isolated from 18/30 (60%) samples. The isolates were tested for motility as a virulence phenotype and compared to two human clinical strains, C. jejuni 11168 and 81-176. Compared to strain 11168, which was used as a control group with a motility index of 1.0, the mean motility index of the group of chicken isolates was 0.75. This was significantly lower than that of strain 11168 (P < 0.05), but similar to that of strain 81-176 (motility index of 0.74), a highly virulent strain. A high motility index (>1.0) was found only in C. jejuni. This study suggests that raw retail chickens continue to pose a significant threat to public health, and safe handling measures are necessary to prevent Campylobacter-associated food-borne illness among consumers.

Campylobacter is one of major foodborne pathogenic bacteria worldwide, and its symptoms after human infection include diarrhea, abdominal cramping, and headache (Habib et al., 2013). It is mainly associated with poultry including chickens, turkeys, and ducks (Moffatt et al., 2020). Poultry’s body temperature at 40－43°C and intestinal conditions of low oxygen tension correspond well with the optimal growth temperature, 42°C, and microaerophilic nature of Campylobacter, suggesting that the intestine of poultry is an ideal niche for Campylobacter (Park, 2002). Even though such unique growth conditions are unlikely to occur in food-related environments and Campylobacter is vulnerable to oxygen at the level of normal atmosphere, foodborne illnesses by Campylobacter remain high around the world.

Campylobacter was grown on tryptic soy agar supplemented with 5% (v/v) sheep blood at 37°C for about 28 h under microaerobic conditions (6－12% O2, 5－8% CO2) using Anaero Pack-MicroAero (Mitsubishi Gas Chemical Co.) as described previously with a minor modification (Jung et al., 2017). The culture was suspended in Mueller-Hinton broth using sterile cotton swabs at OD600 0.1. The cell suspension was inoculated onto a soft agar, Mueller-Hinton containing 0.4% agar, by stabbing the center of the agar to the bottom with a pipette tip loaded with 2 µL of cell suspension, followed by injecting the suspension. The inoculated plates were incubated at 37°C under microaerobic conditions with the lids facing upward. The motility halo was measured in diameter at 48 h. Motility index was calculated as the ratio of the diameter of motility halo of test strains to the mean of the triplicate measurements of a reference strain, 11168, which is a clinical isolate from human diarrhea (Champion et al., 2008).

Retail raw chickens were analyzed for the presence of Campylobacter by a selective enrichment in bolton broth followed by selective plating on preston agar, and subsequent confirmation tests. Campylobacter was commonly found in both whole chickens (23 out of 30) and chicken cuts (22 out of 30) (Table 1). It was found in 45 (75%) out of 60 tested chicken samples overall. There was no difference between whole chickens and chicken cuts in terms of prevalence of Campylobacter. C. jejuni was more common than C. coli in tested chicken samples as many previous studies had shown (García-Sánchez et al., 2018; Kim et al., 2019). In some studies, however, C. coli was more common than C. jejuni in chicken meat (Walker et al., 2019).

Prevalence of Campylobacter in retail raw chickens in this study

Prevalence of Campylobacter in retail raw chickens in other studies 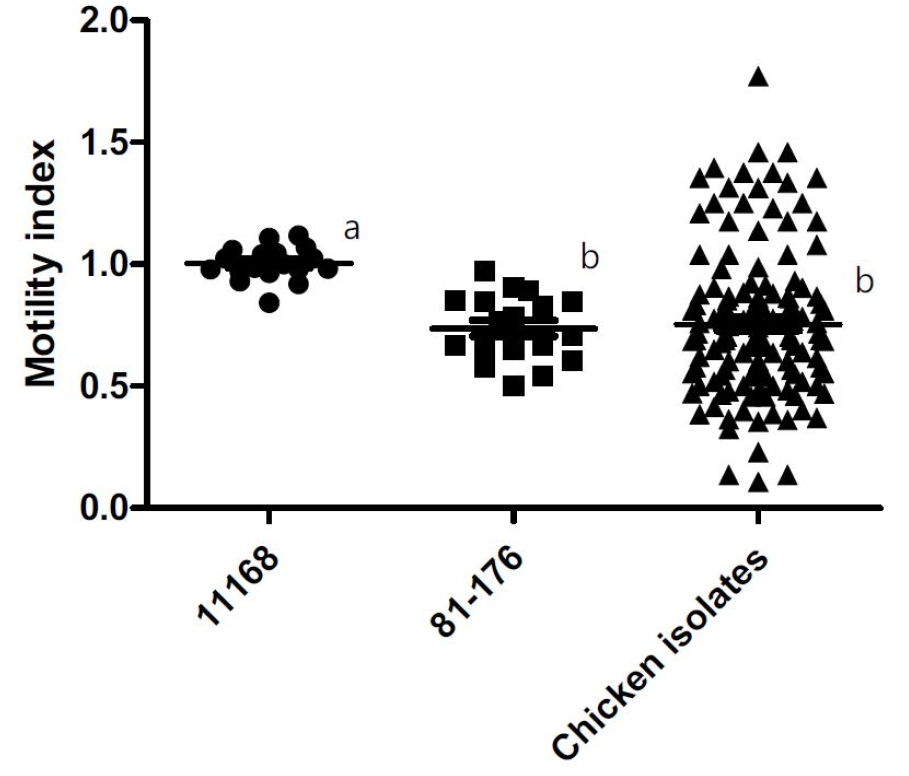 In conclusion, such high prevalence and motility of Campylobacter in retail chickens suggest that they pose a significant threat to public health in Korea.

This research was supported by Main Research Program (E0193120-02) of the Korea Food Research Institute (KFRI) funded by the Ministry of Science and ICT.